In the last Open Access paper published by UNIBS and POLIMI, a new methodology for
the thermal stability test of CO2 blends have been developed and tested.
The method proposed relies on the study of the thermodynamic behaviour of the
working fluid from the variation of the van der Waals coefficients. The comparison of
the estimated coefficients a, b and the molar mass (MM) from the regression of the
experimental data (in the gas phase), starting from the virgin fluid isochoric line, and
after different thermal stress test, can be representative of potential decomposition of
the investigated fluid. As a consequence of the thermal stress, the substance
decomposes in a mixture of different unknown species that, for simplicity, is assumed
as a pure fluid characterised by different coefficients a, b and MM. Moreover, starting
from the obtained parameters, the isothermal compressibility k T can be used as a
proper index to highlight the impact of the thermal degradation on the power cycle.

An example of the new method is briefly discussed for a mixture of carbon dioxide and
perfluorohexane, with molar fractions of 80% and 20% respectively. In Figure 1 , the
virgin fluid measurements are along mixture density value of 99.4 kg/m 3 , in the gas
phase, while measured p-T points after each thermal stress are represented. The best
fit of the experimental values, using the van der Waals equation of state, yields the
values in Table 1 , assuming a pure fluid behaviour of the mixture, while Table 2 shows
the resulting isothermal compressibility k T at different temperatures. Since
measurements at 250°C and 300°C are in agreement with the fresh mixture, the values
were included for the calculation of the virgin mixture parameters.
Although the van der Waals parameters are slightly different after the thermal stress
tests at 350°C and 400°C, the mixture can be considered thermally stable up to 400°C:
this behaviour is also confirmed by the parameter k T . Decomposition phenomena occur
from 450°C where not only the isothermal compressibility increases by more than 50%
with respect to the virgin mixture but also a strong deviation of the van der Waals
parameters from initial values can be observed 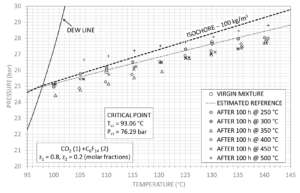 Table 1 Parameters a, b and MM of the van der Waals equation of state of the mixture carbon dioxide and perfluorohexane.

Table 2 The estimated isothermal compressibility kT of carbon dioxide and perfluorohexane at 120°C for the virgin and the decomposed mixture using the van der Waals coefficients and MM of Table 4.

PS: For more information, follow this link to the online article: link.