You are here: Home1 / City, University of London 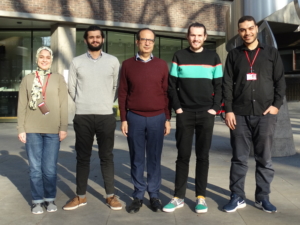 CITY has over 100 years of experience of preparing graduates to take lead roles in industry and business and has long standing research collaborations with both commercial and non-commercial organisations. CITY attracts over 23,000 students from 156 countries, while teaching staff are drawn from nearly 50 international locations. CITY has been amongst the top 10 universities in the UK for the employment prospects of its graduates.

Since 2007 extensive facilities for testing high speed machines including gas turbine engines have been developed at CITY through a number of European Commission and Innovate UK projects. The Turbomachinery and Energy Systems Research Group forms part of the Thermo-Fluids Research Centre within the Department of Mechanical Engineering and Aeronautics, and is active in experimental and computational research in turbomachinery and their integration with energy and transport systems. Primarily this includes fundamental studies on turbomachinery aerodynamic performance, with application areas including gas turbines fired using alternative fuels, micro gas turbines, organic Rankine cycles and supercritical CO2 cycles. CITY staff have over 100 publications in relevant areas of research and development in turbomachinery, gas turbines, micro gas turbines, organic Rankine cycles, high speed electrical machines and drive electronics.

CITY’s contribution to the project focuses on the following areas together with Exergy:

2. Preliminary sizing of the turbine and expander to enable initial cycle analyses.

3. Aerodynamic design and optimisation of an axial flow expander for a full-size plant.

6. Involvement with the dissemination and exploitation of the project results.

Abdulnaser Sayma is a professor of Energy Engineering, at City University since 2013 and the Associate Dean for Post Graduate Studies. He obtained his PhD from the University of Manchester in 1994 and worked as a Rolls Royce Research Fellow at Imperial College London before becoming a professor of Computational Fluid Dynamics (CFD) at University of Sussex in 2006. His main research areas are the development of turbomachinery for energy systems including gas turbines, micro gas turbines and organic Rankine cycles focusing on renewable and alternative fuels, development of compressible flow CFD methods for turbomachinery applications and the development of turbo compressors and expanders and thermal energy storage for concentrated solar power applications. He has been leading a number of research projects in industrial gas turbines, CFD modelling and experimental validation of compressors and expanders in collaboration with industry and European research institutions. He has been leading a team developing a micro-gas turbine powered by concentrated solar power using a solar dish system (OMSoP), and currently leads the SolGATS project for integrating solar powered micro gas turbines with thermal energy storage. He is also leading EPSRC funded research on fundamental studies on organic Rankine cycle expanders (NextORC). He has also been leading a work package on a major project on the future generation of industrial gas turbine technology fired by hydrogen rich synthetic fuels. He is a fellow of the IMechE and the Royal Aeronautical Society and a member of the European Turbine Network Project Board.

Martin White is a Research Fellow within the turbomachinery research group at CITY. His primary interest is in understanding and characterising the performance of turbomachines accounting for real gas effects, and has experience in the aerodynamic design, modelling and optimisation of turbomachinery components. He is currently working on the EPSRC funded research project NextORC which seeks to develop improved performance models for turboexpanders operating within organic Rankine cycle systems. He has authored over 10 peer-reviewed journal and conference publications.

Omar Aqel is currently a PhD candidate at the CITY. He is investigating cycle and turbine design optimisation of power plants utilizing CO2-based working fluids. He has published research on the sensitivity of cycle and turbine designs to dopant molar fraction and the selected fluid property model. His current work is focused on small-scale cycles operating with radial inflow turbines.

Salma Salah is a PhD candidate within the turbomachinery research group at CITY. She obtained her master’s degree in Mechanical Power Engineering from Cairo University in 2016. Her main research focus is on the development of power generation systems the different renewable energy applications. She is currently working on designing and investigating the performance of a multi-stage axial turbine for a 100 MW CSP plant operating with CO2 mixtures. A particular focus is on the development mean-line design and performance models.

Abdelrahman has been a PhD candidate at CITY since January 2020. He also holds the position of Assistant Lecturer at the Faculty of Engineering, Alexandria University since 2015. His current research fields are turbulence modelling, performance evaluation of axial flow turbines, machine learning and optimisation. Within the SCARABEUS project he is responsible for the CFD analysis and blade shape optimisation of the turbine. Abdelrahman has been awarded B.Sc. degree in 2014 with the degree of honour and M.Sc. degree in December 2019 in Mechanical engineering from Alexandria University. Abdelrahman has a wide experience with thermal equipment design and mechanical design.

DESCRIPTION OF ANY SIGNIFICANT INFRASTRUCTURE AND/OR ANY MAJOR ITEMS OF TECHNICAL EQUIPMENT, RELEVANT TO THE PROPOSED WORK

CITY has extensive facilities for computational and experimental research focused on turbomachinery. This includes a high-performance computing cluster, an in-house CFD and aeroelasticity code (SURF), and inhouse design tools for the design of turbines operating within non-ideal working fluids. Furthermore, CITY has a test facility for micro gas-turbines, and are currently developing a closed-loop wind tunnel for studying high-speed flows of organic fluids. Experience in these areas will be used to help undertake the and validate the turbomachinery design and characterization work.